EN
10/08/2020
The trickle machine developed by GROB sets new standards in the assembly of electric machines and once again demonstrates GROB's extensive know-how in the field of electric mobility. The plant consists of flexible production cells and enables a rotating transfer between the trickle and curing process by means of a specially developed transfer gripper. Thus, process steps can be optimized, separated from each other, and the cells can be designed modularly. 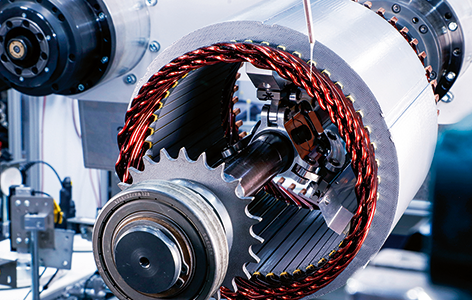 In the production of stators, which are part of the electric motor, impregnation is the final manufacturing step and serves as secondary insulation. In order to increase the power density of the stators, all air bubbles within the wire windings are displaced with insulating material, since within these air inclusions the heat dissipation is disturbed and hotspots could develop. In addition, the copper windings should be fixed so that there is no more relative movement between the individual wires and damage to the windings can be prevented. Furthermore, the impregnation process has a particular influence on the electrical parameters such as capacity and partial discharge.

In addition to impregnation, the trickle or heated dip process is usually used in electric mobility. GROB has decided to use the trickle method. This is used both for applying resin to the winding and to the spaces in the groove, as well as for mechanical fixation and electrical insulation, thus improving heat dissipation. The trickle process has the advantage that the resin is only applied to the wire winding and the stator core does not have to be cleaned after the impregnation process.

The new trickling machine developed by GROB consists of individual flexible production cells. The specially developed transfer gripper enables the rotating transfer between the trickling and curing process. Thus, the process steps can be separated from each other and the cells can be built up modularly. Due to the modular design, it is also possible to integrate processes such as whirl sintering or gel coating into the overall process and to combine the curing processes of two processes. In addition, several product designs can be run on one system, whereby the changeover takes place in a cycle time neutral manner.

The core process "rotating transfer" was set up in the form of a test stand at GROB, so that the system could be thoroughly tested before receiving several series orders.

With a near-series trickle machine, impregnation in the form of a film will also be shown at the GROB Virtual Open House. With the factory's own trickle machine, GROB has already manufactured more than 2,500 stators to customer order and determined parameters for series production. In close cooperation, GROB supports its customers here in the testing of their part designs. Simultaneous engineering is used to verify whether the trickle process is also suitable for series production. "Well-known OEMs and Tier1 have already drawn on our expertise," reports Florian Sackl, GROB team leader "Development Impregnation Technology, Innovation Management/E-Mobility."