EN
04/11/2016
This year, GROB China will be appearing for the second time at the China CNC Machine Tool Fair (CCMT) in Shanghai. In Hall N1, stand 101, GROB is presenting its GA350 universal machine, offering the latest high-technology in the 5 axis range. The GA350 is part of the Asian series with two variants, the GA350 and GA550. These machines were developed on the basis of the successful G350 and G550 universal machine series and are produced entirely at the Chinese GROB plant in Dalian. 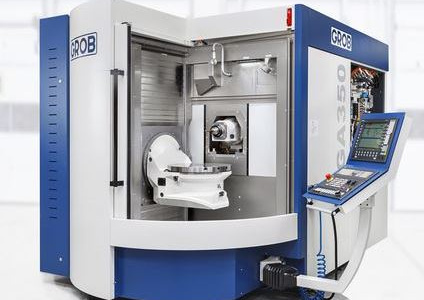 Mindelheim/Shanghai. On its 168 m² stand GROB China will present a GA350 universal machine fitted with Heidenhain iTNC 530 controls and a high-performance GROB motor spindle with a rotational speed of 16,000 min-1 and 200 Nm torque. The machining of a steel molded part will be demonstrated at the trade fair.  GROB China's General Manager Hongzhi Ren announced the forthcoming appearance at CCMT, saying: "We are the first company to be allowed to produce and supply high technology in the 5-axis range in China." "This is a great opportunity to demonstrate our technological know-how."

This is GROB China’s second appearance at CCMT. Traditionally GROB is represented at the affiliated trade fair, the CIMT in Beijing. As a recognized specialist trade fair, CCMT enjoys wide recognition, particularly in the fields of aerospace, medical technology, tool and die making as well as automotive and mechanical engineering. "Of course we are pleased to take the opportunity at CCMT to consolidate our reputation in the region and in key markets," explained Alexander Attenberger, international Sales Director for universal machines, describing the reasons behind GROB's appearance at the trade fair.

GROB has been active in China for more than a quarter of a century
The success story for GROB in China started in the late 1980s. At the start of the 1990s, the initial orders were handled by the Chinese joint venture partners of western automobile manufacturers. The first direct order with a Chinese partner, outside of a joint venture project, was completed in 2002. Soon after, in April 2003, a new era in GROB's Asian business began with the founding of GROB Machine Tools (Beijing) Co. Ltd. Two years later, GROB's Shanghai branch was set up with a workshop and seven service employees. Following its large-scale growth, the Shanghai branch site has expanded to more than 3000 m².

GROB plant in Dalian achieves a new milestone
The highly successful growth in GROB’s Chinese business since the establishment of GROB Machine Tools (Beijing) Co. Ltd. resulted in the decision in the spring of 2010 to go ahead with a fourth GROB production center in the People’s Republic of China. On June 18, 2012 the GROB plant in Dalian started production with a production site of 12,000 m². To ensure GROB's continued growth at the Dalian production site, the production and logistics capacities have been expanded to 27,000 m² – sufficient space to achieve the business goals of the next few years.

GROB currently employs a total of more than 550 workers in Dalian, Beijing and Shanghai. Together with the GROB plants, GROB China today serves about seventy-five percent of the Chinese automotive industry and is one of the most reputable suppliers of machine tools in the People's Republic of China.